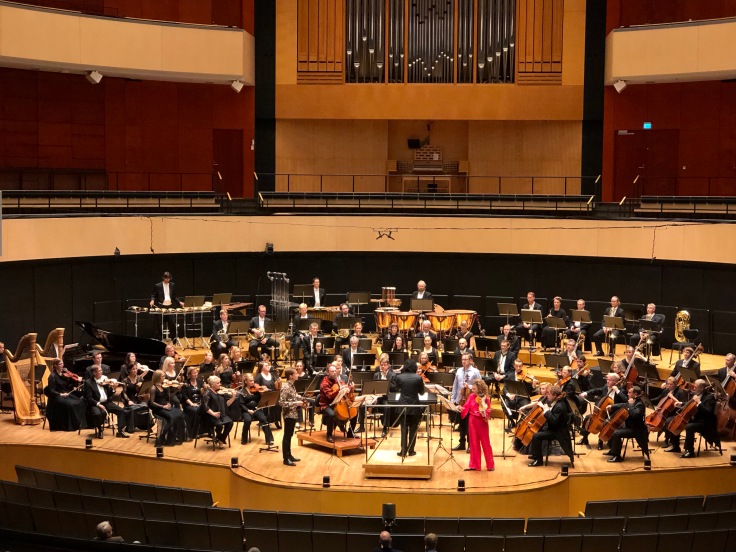 For this week’s uplifting concert at the Sibelius Hall, the Lahti Symphony teamed up with their artist-in-recidence, the outstanding Meta4 string quartet, as well as the wonderful young British conductor Kerem Hasan. Featuring John Adams’ Absolute Jest (2011), framed by Debussy’s Prélude à l’après-midi d’un faune (1895) and Nikolai Rimsky-Korsakov’s Scheherazade (1888), the programme was a feast of orchestral colour.

Absolute Jest celebrates the spirit of Beethoven, whose inextinguishable musical energy is akin to that of Adams. One just needs to think of those hammering E minor chords that launch Harmonielehre (1985), and one finds the ghost of Beethoven watching over, approvingly.

In Absolute Jest, Beethoven quotations, mainly short scherzo fragments from the late string quartets as well as the Ninth Symphony (1817-24), form the basis of the actual musical material. These fragments are thoroughly Adamsized, much in the manner of Stravinsky’s quotations of Pergolesi in Pulcinella (1919-20/1965), the initial impetus for Absolute Jest.

Scored for string quartet and orchestra, Absolute Jest is a thirty-minute single-movement concerto, calling for an all-virtuoso ensemble.

Following the 32-bar introduction, the solo quartet enters, picking up the Beethoven motive. Developed by the quartet and the orchestra, the motivic material is transformed into various surprising guises, in brilliantly Adamsian manner.

Here, Adams’ scoring is fabulous as ever, with the solo quartet admirably balanced with the large orchestra.

In the climatic final section, based on a sequence of chords from the Waldstein Sonata (1803-04), another dazzling canvas opens up, providing a formidable musical rollercoaster. On the final bars, the music cools down to a brief duet for cowbells and detuned piano, providing a marvellous ending for Absolute Jest.

Spectacularly performed by Meta4 and the Lahti Symphony with Hasan, Absolute Jest was a celebration of unhindered energy and luminous counterpoint, deeply rooted in utmost musical wit and instrumental drama. Living up to its name, the performance of Absolute Jest was, simply, absolute jest.

The solo quartet and the orchestra were eloquently balanced throughout, paying homage to Adams’ showcase orchestration. Meta4 tackled the multitude of challenges in their solo parts with admirable virtuosity, whereas the orchestra and Hasan were their ideal partners.

Opening the evening, Debussy’s ever-enchanting Prélude à l’après-midi d’un faune was heard. In the late 1880s, Debussy first came across with Javanese gamelan, a musical encounter that had a profound and lasting effect to the composer’s ideas on harmony and sonority.

The Prélude, scored for and orchestra of strings, winds, horns and crotales, is often hailed as a herald of modernism, with its departure from traditional tonality, unique orchestration and ever-transforming textures. There is nothing short of musical revolution inherent in its sublime eight-minute universe.

With Hasan and the Lahti Symphony, a well-paced performance was heard. The famous opening flute solo was beautifully performed, with the solo horn providing its answer formidably. The strings and harps shone with their luminous hue, alongside charming woodwind passages, while the glimmering crotales provided their subtle colouring.

However, in the crystal-clear acoustics of the Sibelius Hall, some of those key pp and ppp passages could have been a tad more subtle, especially with the horns and some of the winds. On the other hand, there was formidable clarity throughout, highlighting Debussy’s unusual orchestration.

The evening closed with another case in point of orientally-inspired western music, Rimsky-Korsakov’s 1888 symphonic suite Scheherazade. Loosely based on Arabian Nights, Scheherazade is a Technicolor adventure with, somewhat superficial, oriental flavour.

Yet, ever since its premiere, Scheherazade has been a well-loved part of the orchestral repertoire. With its immediate communicativeness it has become Rimsky-Korsakov’s best-known composition, overshadowing his earlier oriental adventure, the Antar Symphony (1865/1875/1891).

Cast in four movements, Scheherazade follows a traditional symphonic outline. Rimsky-Korsakov employs a solo violin as a sonic personification of Scheherazade the narrator, with its lyricism contrasting the brass-heavy opening figure, associated with the Sultan Schariar from Arabian Nights.

While Rimsky shunned note-to-note programmatic interpretations of his score, one can trace several links between the music and its literary inspiration. In a typically western manner, the Orient is seen through mystification and romanticization in Scheherazade.

Hearing Scheherazade in concert after many, many years away from it was an interesting experience. While, in my opinion, the proto-Hollywood score still attests to some of Stravinsky’s harshly critical attitude towards the music of his former teacher and mentor, one cannot escape the sheer enchantment cast by Rimsky’s score.

As for the performance, Hasan and the Lahti Symphony embraced Scheherazade with splendid musicianship. A powerhouse performance in every way, with the orchestra clad in marvellous colour and textural clarity. The violin solos were performed with utmost beauty by the leader Maria Leino. Well paced and balanced by Hasan, the orchestra gave a fine performance indeed.

Concluding with a post-concert performance by the members of Meta4 and Lahti Symphony at the Sibelius Hall foyer, a happy evening altogether.

One thought on “John Adams’ roaring Absolute Jest lived up to its name with Meta4, Lahti Symphony and Kerem Hasan”